A SEWING MACHINE, DELIVERED TO A SAVAR VICTIM

Mofazzol Hossain, who is a 35 years old, was working at a Garment factory as a Operator at Rana Plaza, Savar, Dhaka. He has two kids. His wife, Parveen Akhtar, is a Housewife. He was the only incomer of his family. A bit financial support was storing from his inherent wealth. 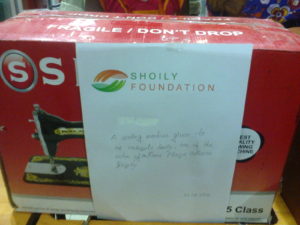 On 24th April, Mofazzol was working on the 8th floor of Raza plaza and suddenly he heard severe sounds around while building collapsed and he was trapped immediately. In the incident, no sooner had he could understand, the building was collapsing down to the ground. He could not able to rushed to the adjacent room to save him while the whole building collapsed within a few seconds and after a few moments, he discovered his hand was severely fractured and hand joint-bone was uncovered due to tore off flesh from upper and lower part of hand joint. Subsequently, he could be able to move out from the building with the help of rescue team. 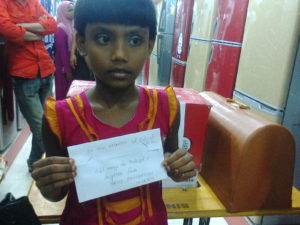 Currently, he was under treatment at CRP. Tissue transplantation on his hand was performed while he was admitted in a govt disabled hospital. Now therapy is performing at CRP in full swing. The doctors of CRP confirmed him to release him within very few days.

Regarding his future plan, he argued he was well-experienced on Cloth section as he worked on the Garment for a long time. Consequently, he planned it would be better for him if he could engaged on cloth related business from now on.

Later, Shoily foundation rehabilitation team assessed his reintegration plan as he was not willing to go back to her previous job as a garment worker. Rather, he wanted to start a business which is convenient as well as suitable for him. Accordingly, he was provided with a sewing machine by the rehabilitation team of Shoily Foundation on August 4, 2013, as per his intention and our assessment.

He argued, his wife knew sewing the cloth. He intends to earn money by using the sewing machine that we provided him with. In a future plan, he wants to use the skilled of sewing and this sewing machine for future cloth business.

Notably, he received 5,000 taka from Enam medical at Savar and 10,000 taka from govt fund for his treatment and post-treatment activities. He heard govt would take few steps for his recovery purpose but he did not get any update from them officially yet. He said, the doctors of disabled hospital wanted to release him early, but he forcibly stayed there 18 days more. Without this matter, he was satisfied with their medical treatment that was performed on him.

Their daughter was paid with some gift money from Shoily foundation team to buy Eid gift which was on the door since her parents are not capable of providing any gift for her in the festival this year. This gift money brought a smile on her face quickly.

He was still wondered due to not getting any response from govt and also he was upset regarding the cost of post-treatment and medicine after releasing from CRP. However, we will keep him in our touch and will try to cooperate him on the post-treatment as well.