PARVEEN, A SAVAR VICTIM, DELIVERED WITH A SEWING MACHINE

Parveen Akhtar, who is a 23 years old, was working as a Garments designer once, but she left the job in order to take care of her kids. She has two children and her disabled mother-in-law at her home. Her husband, Azizur Rahman, is an assistant supervisor at accounting section of garments at Raza plaza. Her husband was working on the 3rd floor of Rana Plaza, Savar, Dhaka who was the only income of her family.

On 24th April, her husband was working on the 3rd floor of Rana Plaza, Savar, Dhaka. Parveen was looking for her husband and nieces after the collapsing took place. She received the dead body of her nieces but not that of her husband. She arranged to lay their dead bodies at the graveyard as well. She received the dead body of her husband after 17 days of the incident where she found the head of the dead body were nearly separated from the rest of the body. She was desperately shocked staring at this scene. She lost three members of her family on the same day of that incident. All responsibilities of her family have been fallen on her head following this. Moreover, she was continuing to be underestimated by her mother-in-law due to getting the blame for the death of one relative-in-law simultaneously. She was spending each day with huge tension and distress since then. She argued for playing from all. She vowed to her late husband that she would take care for her mother-in-law all the time of his absence. But she was suffering severely by this uncertain life arose.

She had not any savings or heir wealth. She could not able to realize how she could run the expenses of her two children even. As she got love-married, she did not get any sort of support from her parents, unfortunately.

Regarding his future plan, she argued she was well-experienced on Cloth section as she worked on the Garment for a long time. Consequently, she planned it would be better for her if she could engaged on cloth related business since then. 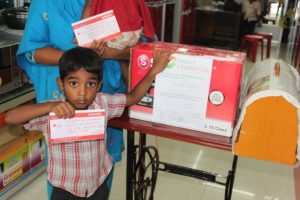 Later, Shoily foundation rehabilitation team assessed her reintegration plan as she was not willing to go back to her previous job as a garment worker. Rather, she wanted to start a business which is convenient as well as suitable for her. Accordingly, she was provided with a sewing machine by the rehabilitation team of Shoily Foundation on Oct 24, 2013, as per her intention and our sincere assessment. As she knows how to sew we did not provide her with the sewing training cost even though we offered her. Her plan is to sell the cloths after designing the dresses at the home premise besides taking care of her children at the same time. To succeed, she has a plan to buy 2/3 sewing machine later on. However, she intends to initiate her start-up business with this sewing machine that Shoily foundation members provided with full swing. 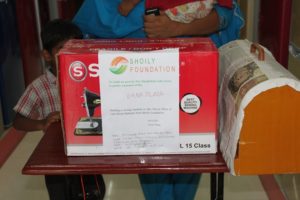 Notably, she received 10,000 taka from a particular fellow from Gazipur, 16,000 from another party. She also offered to get 2 lacs taka from govt fund for her children future expenses. But this money was deposited at the Agriculture bank as with fixed deposit account so as to she could not able to raise this amount of money before 18 years. So she was wondered how she runs her family at this moment where her family includes her disabled mother-in-law as well beside her two children at her home.

Her children were paid with some gift money from Shoily foundation team to buy Eid gift which was already passed away though, since her parents did not able to providing any gift in the festival this year. This gift money brought a smile on their faces quickly.

We will keep her in our touch and will try to cooperate her on the post-survival as well.